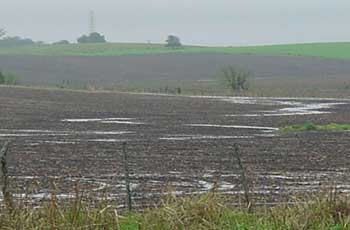 When wet weather delays field work and planting, corn growers deliberate on whether to switch to earlier maturing hybrids. This is a critical decision that impacts producers' risk and profitability, especially in northern areas where growing season length often limits yield. Planting full-season hybrids too late puts them at risk of cool weather and fall frost damage before maturity, but switching to early hybrids too soon can result in severe yield and profit penalties.

Long-term studies by both Pioneer and universities have shown a clear yield and profit advantage for full-season hybrids. When planted in a timely fashion, these hybrids can make use of the entire growing season to reach their full yield potential. Even when planted late, these hybrids often outperform early maturing hybrids by adjusting their growth and development to reach maturity in a shortened growing season.

Pioneer Agronomy Sciences has conducted planting date studies for over 30 years. This article reports results from 18 seasons across central, north central, north, and far north locations of the Corn Belt (Figure 1). Planting dates ranged from early April to mid-June. Several hybrids were included in each maturity group so that true maturity responses could be measured, rather than just specific hybrid responses.

The experimental design was a randomized complete block in a split-plot arrangement with planting date as whole plot and hybrid as sub-plot with four replications. The plots were four rows wide and harvest data were collected from the center two rows of the plot. To allow for continued hybrid maturity development and grain drying, the later planting dates were harvested separately at many locations.

Adjusted gross income/acre was calculated as gross income at a corn price of $5.00/bu minus drying costs and discounts for low test weights. Drying costs were calculated based on 4 cents/bu for each point of moisture above 15%. The test weight discount schedule used for this analysis is shown in Table 2; however, discount rates vary among corn buyers. (Test weight discounts are more relevant to grain delivered wet to a buyer versus corn dried on the farm, as test weight increases significantly as moisture is removed by field or artificial drying.)

Full season hybrids provided the greatest profitability when planted up until May 27.

Growers may consider switching to an early maturity hybrid after this point; however, the economic advantage to doing so was not statistically significant in the studies.

Long-term data show that full season hybrids provide the greatest profitability until approximately May 28 in the north-central Corn Belt. Growers may consider switching to an early maturity hybrid after this point, especially if planting is delayed until June 1 or later when the economic advantage is more significant.

Growers in the north-central Corn Belt planting mid-maturity hybrids should consider switching to an early maturity hybrid only if planting is delayed until after June 5 (Figure 5). After June 11, the data indicate a significant advantage to switching.

The northern Corn Belt studies included 17 environments in Minnesota and Wisconsin. The optimum planting timing in this region was late April or early May (Figure 6).

Adjusted gross income of mid-maturity hybrids was greater than that of early maturity hybrids throughout the planting date range of the northern Corn Belt studies, indicating no advantage to hybrid switching, even with extremely delayed planting (Figure 7).

Long-term data show that full season hybrids provide the greatest profitability until at least May 26 in the far northern Corn Belt. If planting is delayed until June 3 or later, an early maturity hybrid will be more profitable than a full season hybrid in most cases.

Delayed planting can influence corn grain moisture at harvest, which affects overall profitability. However, the importance of grain moisture must be considered within the context of yield potential and harvest schedule. Early maturity hybrids may allow for earlier harvest timing, but may also have a lower yield potential than full-season hybrids.

By comparing harvest moisture (CRM) ratings, you can estimate the difference in moisture content between hybrids and help plan a harvest schedule. A hybrid with a CRM difference of 10 would be approximately 10 days later to reach a similar harvest moisture level (normally in the low 20's) if planted on the same date as the earlier hybrid.

By using the general rule of thumb that one CRM equals ½ (.50) point of moisture, a hybrid that is rated 10 CRM later would be approximately 5 points wetter if both hybrids were planted and harvested on the same days. In the field, however, this relationship can change depending on harvest timing, moisture content at harvest and environmental conditions.

A three-year study that was conducted by researchers at Purdue and Ohio State Universities documented that hybrids can adjust their growth and development, requiring fewer growing degree units (GDUs) to reach maturity when planted late (Table 1). Three hybrids were grown at two locations. GDUs to physiological maturity were measured. Early planting dates ranged from late April to early May, while late planting dates were from early to mid-June.

Table 1. Reduction in GDUs required to reach 50% black layer with delayed planting in a three-year study.

Averaged over all hybrids, locations and years, 244 less GDUs were required when planting was delayed from late-April or early May to early or mid-June (approximately 40 days). This is an average reduction in hybrid GDU requirement of about six GDUs per day of planting delay.